To date, Particle In Cell (PIC) simulations represent a preferred tool for studying the electron physics of reconnection. To reduce the numerical cost of simultaneously resolving the disparate spatial and temporal scales associated with electron and ion dynamics, PIC simulations often apply artificially low values of ion to electron mass ratio, mi/me. Previous scaling studies have suggested that the structure of the reconnection region is not strongly dependent on this parameter; however, in a recent study by our group, we systematically explore the role of mi/me and the out-of-plane guide magnetic field, Bg. We find that the structure of the reconnection region lies in four distinct regimes. In particular, at the natural mass ratio, mi/me = 1836, modest guide magnetic fields (relative to the reconnection field, Br) are sufficient to magnetize the electrons, resulting in a previously undetected regime of reconnection results where large scale magnetized electron current layers form [5]. 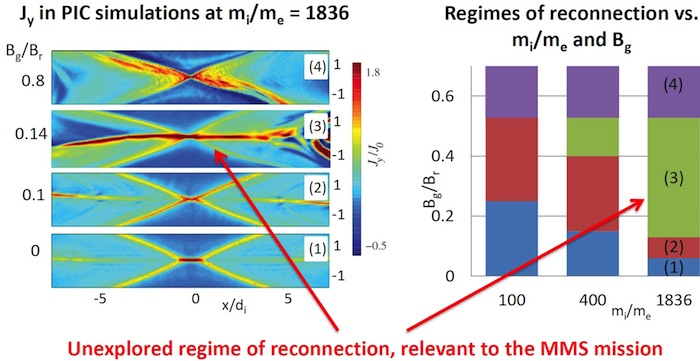 Figure 6: left) Out of plane current observed in kinetic simulations at mi/me=1836 for a range of guide magnetic fields. An abrupt transition occurs at Bg/Br ~ 0.14 into a regime (3) of extended electron current layers driven by electron pressure anisotropy. right) The regime boundaries are sensitive to mi/me and the regime (3) of extended current layers does not occur at low value of mi/me.

Figure 6 summarizes some of the findings by Le, et al., 2013 [5]. The left panels show the out-of-plane-current, Jy, representative of the four reconnection regimes. These are obtained from PIC simulations with mi/me = 1836 and Bg/Br = 0, 0.1, 0.14, and 0.8, respectively. The anti-parallel case, Bg = 0, of regime 1 contains a so-called “extended current layer”, which has been studied extensively in the literature. At reduced values of mi/me their length can reach 20 di. However, at mi/me = 1836, the length of the layers is only about 2di and is unlikely to account for the extended current layers inferred from spacecraft. Regime 2, here represented by the run with Bg = 0.1, was also previously identified. In particular Goldman et al., 2011 explored the ability of a guide magnetic field for deflecting the meandering electron trajectories (carrying the current layers of regime 1). For simulations approaching the natural mass ratio it was found that a weak Bg eliminates the current layers of regime 1 and causes the transition to regime 2 where electron currents flow mainly along the separators.

The newly discovered regime 3 includes truly extended (simulation size) current layers embedded in the exhaust. At the natural mass ratio the “light” electrons are more easily magnetized, and above a modest threshold guide magnetic field Bg/Br ~ 0.14 the abrupt “phase transition” occurs into the new regime where the magnetic moments of the bulk electrons are conserved and no pitch angle diffusion occurs in the exhaust. As we will explore below, this allows electron pressure anisotropy to develop and act as the driver of the extended current layer (seen here for Bg/Br ~ 0.14), along which the plasma is at marginal firehose stability.

In regime 4 the electrons are also magnetized, but for this regime the stronger Bg prevents the plasma from reaching the marginal firehose condition, required for a long current layer to develop. During reconnection in the magnetotial the relative strong Bg of this regime is rarely observed.

Due to the relative small guide field (Bg/Br < 0.25) in the Earth's magnetotail, the limit of small Bg has been studied extensively. Such previous studies mostly apply reduced values mi/me and exclusively fall within regimes 1 and 2. However, as seen in the diagram to the right in Figure 6, at the natural mass ratio the newly identified reconnection regime 3 (with magnetized electrons) applies to an extended interval in Bg/Br and the low threshold (about 0.12) is often exceeded in magnetotail reconnection events. This suggests that regime 3 must be relevant to a range of the reconnection events in the Earth’s magnetotail (as well as reconnection in the dayside magnetopause and the solar wind). In fact, because of the large spatial extent of the regime 3 reconnection layers, these will be easier to detect. It is likely that a significant fraction of the diffusion regions that will be encountered by the MMS-mission will fall within this regime.

The intriguing properties of the large scale current layers (electron diffusion regions) and their relevance to magnetospheric reconnection call for a more detailed exploration of regime 3. For example, in 3D, such intense current layers are expected to be highly unstable to reconnection at oblique angles. However, the new regime is difficult to access by PIC simulations because of the requirement mi/me ~ 1836 (this essentially prohibits 3D kinetic simulations of these current layers due to lack of computation resources). Thus, TREX represents a unique opportunity to study the transitions between these regimes of reconnection at the full ion to electron mass ratio and in 3D.