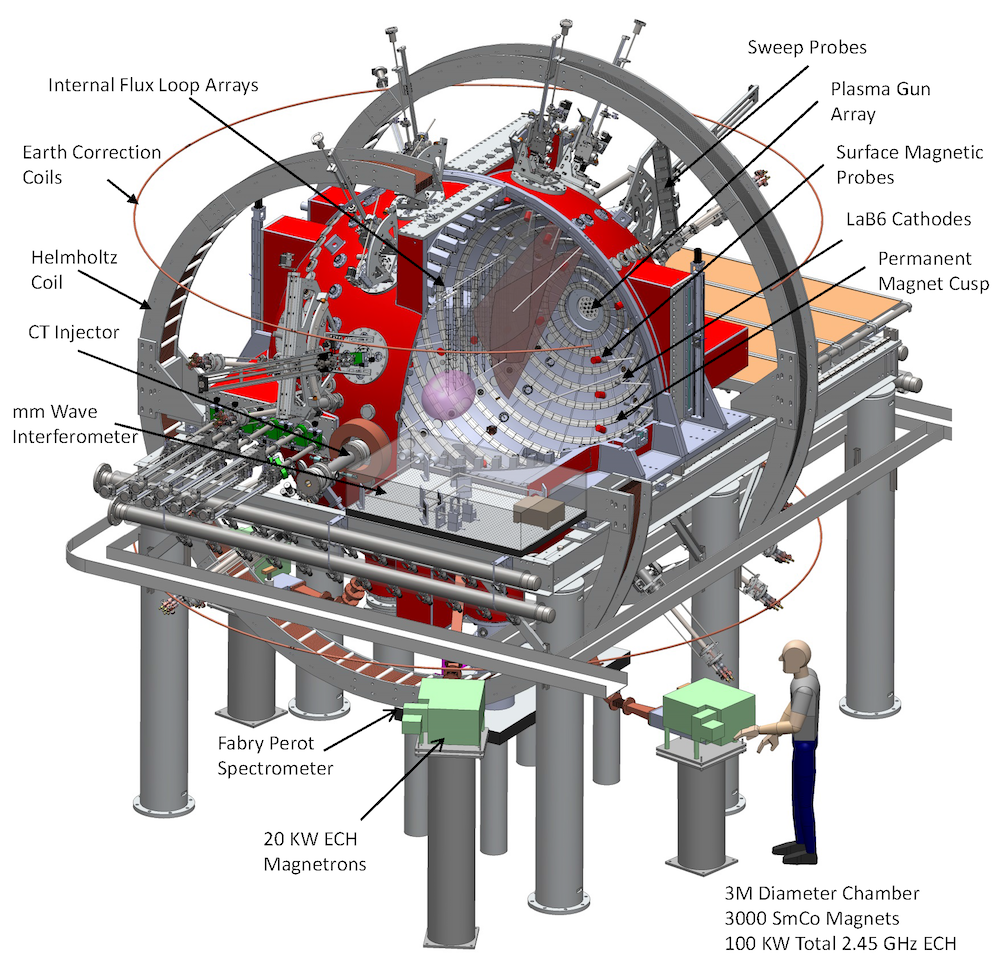 The Big Red Ball (BRB) is a 3-meter-diameter spherical multi-cusp plasma confinement vessel hosting a wide range experimental capabilities to generate plasmas relevant to plasma dynamos, magnetic reconnection, shocks, turbulence, and the formation of coherent strutures in magnetized plasmas. The Big Red Ball and laboratory was constructed in part through a Major Research Instrumentation grant from the National Science Foundation; the remodeling of the new laboratory was supported by the UW – Madison.

This is an accordion element with a series of buttons that open and close related content panels.

Plasmas generated within the vessel are confined by an array of samarium cobalt (SmCo) magnets consisting of 18 rings with alternating polarity magnets comprising a 36-pole magnetic field. Each cusp magnetic field acts like a local magnetic mirror confining the charged particles within the vessel except for those particles with velocities within the loss cone of the magnetic cusp. These particles stream out along the field lines onto alumina ceramic tiles and represent the primary loss mechanism of particles and heat from the plasma. The BRB confines about 14 m3 of plasma with a? convective plasma loss surface area of about 0.2 m2.

The field from the multi-cusp magnets is highly concentrated at the wall resulting in a large volume of unmagnetized plasma. Typical electron temperature and density measurements of this plasma give a very homogeneous plasma with a sharp edge near the wall. Depending on the type of source used and the input power, plasmas ranging in temperature from 2-15 eV and densities ranging from 1017-1018 m-3. 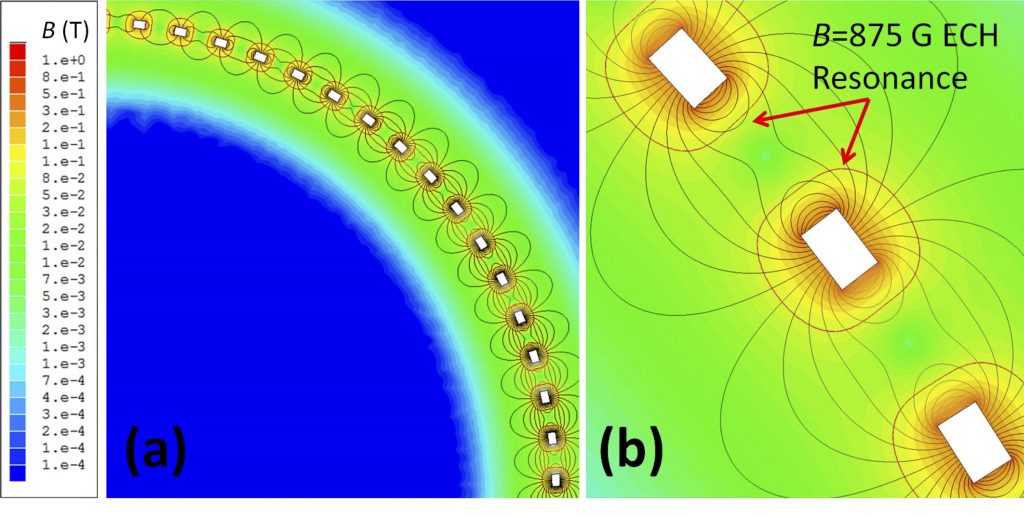 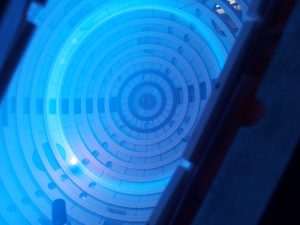 Lanthanum Hexaboride is used as a high temperature (2-15? eV), high density (1017-1018 m-3) plasma source due to its high input power density and robust construction. The electrodes are biased up to 300 V to create cross-field currents that create an edge-localized torque on the plasma. The cylindrical LaB6 cathode is radiatively heated up to 1600° C by an internal graphite heater filament. 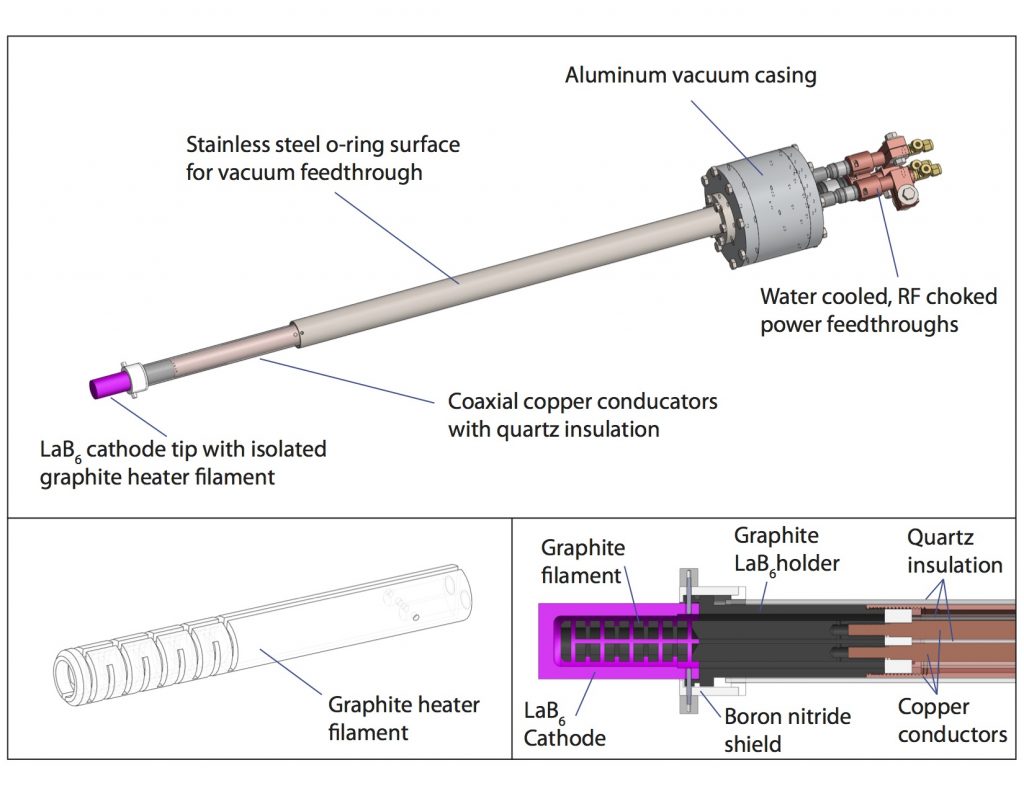 LaB6stirring electrode design. The entire (1.1 meter long) electrode is shown in (a), with detailed views of (b) the graphite heater filament and (c) the LaB6 tip. 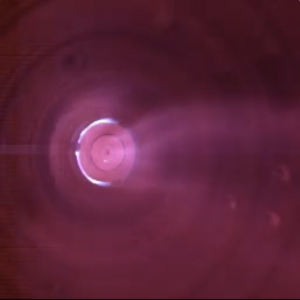 An array of 18 “plasma guns” are used to source streams of high-density plasma (~1018 m-3, 3-5 eV) into the main chamber volume. Each gun is independently powered by a pulse forming network which drives 1 kA of current at 100 V for 10 msec. Different gas species are available (H, D, He, and Ar). If the external Helmholtz coils are used (~70 gauss) then higher core densities are possible (~1019 m-3).

A compact torus injector is mounted on the southern magnetic pole of the vessel. It creates a high-density? (1021 m-3) magnetized plasma ring that is launched into the vessel at velocities of 100 km/s. The compact torus can be injected into background neutral gas or plasma where it expansion reduces its density to about 1019 m-3.

The BRB has 2D scanning probe drives with water cooled supports and stepper motor-controlled positioning that allow radially insertable probes to be used at several? different latitudes of the experiment. These drives will be? able to support a variety of probes:

Eight Hall-effect sensors are placed on the interior vessel wall to measure three components of the magnetic field just outside the plasma.

A collection of compact low-resolution spectrometers with various wavelength ranges are used to document the visible emission spectrum. The spectrometers are calibrated for both wavelength and radiance. The spectra are used for species identification, ionization fraction, and line ratio spectroscopy to determine plasma density and temperature.

The group has a high-speed color camera (Phantom 710) for monitoring plasma? behavior. The camera is sensitive to visible emission from collisionally excited neutral and ion emission with time resolution on the microsecond timescale.

An advanced 1 mm wave interferometer system is available and the single beam is scanned by two mirrors and will allow for an? Abel inversion of electron density profiles. 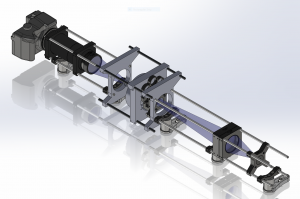 The very successful Fabry-Perot spectroscopic technique developed and applied since the early 1970’s by the Space Physics group at the  University of Wisconsin is being applied to the BRB. This diagnostic is used to measure plasma flow and ion temperature.

The BRB and laboratory are located in a high bay in Sterling Hall, in close proximity to the Physics Department in the central part of the UW-Madison campus. A 3-ton crane provides lifting capabilities for the entire Hall. Decking located at? mid-height of the chamber provides physical access to the experimental system. Control of? experiments is from a separate room located on the first floor. Space for assembly and testing of equipment is provided in an experimental prep room. The lab is supplied with about 1 MW of electrical power and has a chilled deionized water system. Two? large magnet field coils in a Helmholtz configuration provide up to a 250 G axial? field in steady-state. 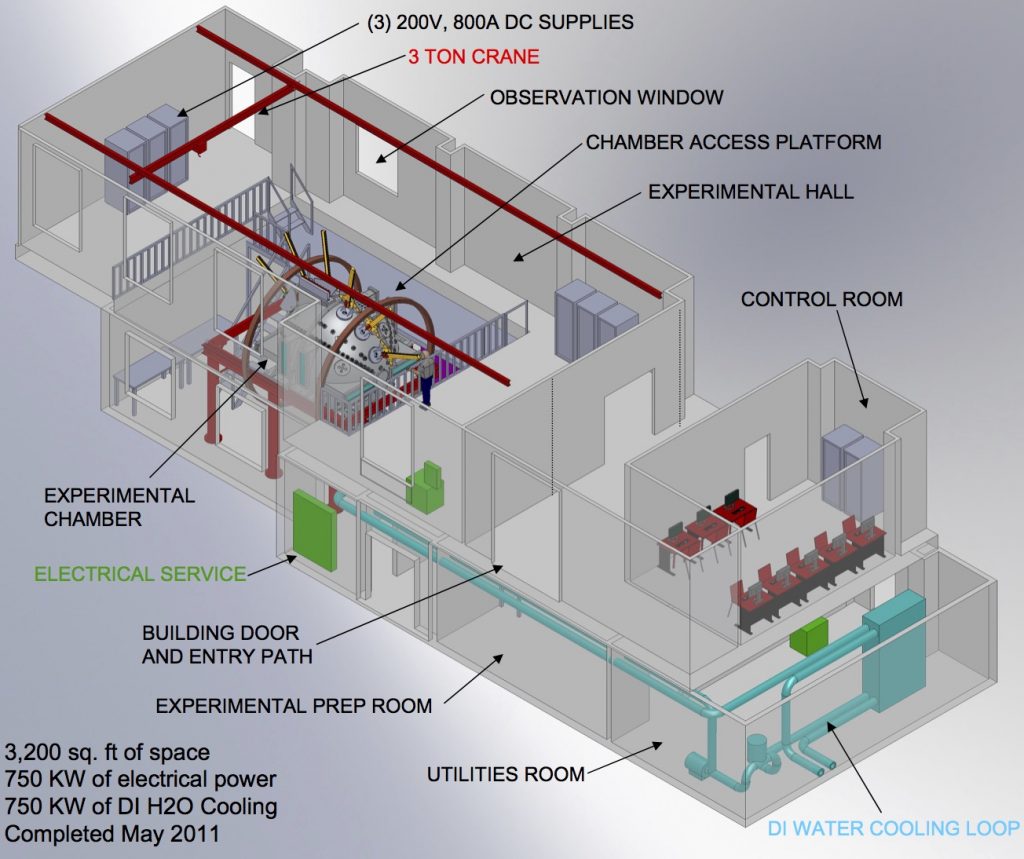